A brief history of Barbershop and Hallmark

“You keep not time … you sing you know not what. It would seem you came lately from a barber’s shop” ~ Thomas Morley, 16th Century Elizabethan composer.
“After supper my Lord called for the Lieutenant’s cittern and … we made barber’s music” ~ Samuel Pepys, 17th Century writer and diarist.

These quotations may not actually refer to the kind of harmony singing that was to evolve into what we now understand as barbershop singing, whose origins lie in the late nineteenth century. From this later time, barbershop close harmony singing rapidly found its way into the lives of many people. It crossed boundaries between race, gender, social status and lifestyle. It gained much favour, not least because it didn’t require any musical instruments, except for the voice and a pitch pipe. It was originally focussed on quartet singing, as the early name of its representative association suggests - SPEBSQSA, The Society for the Preservation and Encouragement of Barbershop Quartet Singing in America. Barbershop is not exclusively a male domain. It is inclusive of ladies’ choruses and increasing numbers of mixed choruses, extending the barbershop community significantly.

Classical choral harmony singing had been developing in Europe for several hundred years, well before Thomas Morley’s and Samuel Pepys’ times and certainly well before the emergence of barbershop singing in North America. It was there that contemporary barbershop had established its roots and influences in the kind of popular music that prevailed in the late 19th and early 20th centuries. The form was first recorded to have emerged in barber shops, hence the name . 2 Its influences included ragtime, jazz and blues and close harmony singing quartets were the superstars of their day in vaudeville theatre. In its early days, it was slow to catch on outside North America, until one particular quartet became famous. The 1950 International champion quartet, the Buffalo Bills, famously appeared in the 1957 Broadway production of The Music Man and the 1962 Hollywood film of the same name. This did much to accelerate the popularity of the art form, when it came to the attention of countries outside of North America.

It was the 1970s that saw the popularity of barbershop singing begin to grow in the UK. At this time there were only a handful of barbershop choruses in the UK, the first of which was Crawley Barbershop Harmony Club (the Crawley Chordsmen), who had begun singing together as early as 1964. They become the first members of the British Association of Barbershop Singers (BABS), which was founded in 1974 and affiliated itself to the Barbershop Harmony Society of America (BHS). BABS became one of the first organisations to represent barbershop singing outside of North America. Barbershop singing in America had lost some of its popularity following the First World War, but began to regain its earlier momentum in the 1930s. The BHS itself was subsequently founded in 1938. 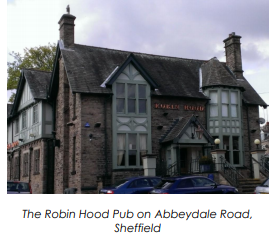 The Sheffield Barbershop Harmony Club was founded in 1978 by a handful of men, at a meeting in the Robin Hood pub on Abbeydale Road. These men included the Club’s first musical director, John Grant, along with Martin Hill and Assistant Musical Director, Ernest Johns, who were particularly influential in launching the club toward their success. They were accompanied by a handful of founding members (Tony Hill, Clive Hill, Dave Jenks, Brian Barber, Tony Foster, Chris Chapman.), who were motivated by the 3 extraordinary effect that barbershop close harmony singing had on their audiences. This drove their desire to sing and perform, not to mention that it was a thoroughly sociable and enjoyable pastime, particularly when it comes to singing in the pub after rehearsals and shows. 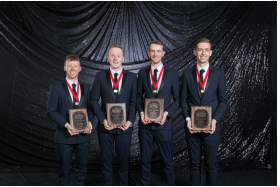 Twenty-first century barbershop is rapidly developing, as it now attracts young talented musicians, who love the freedom of a cappella harmony singing. Notably, it has also become popular in universities, with major national a cappella singing competition, the Voice Festival University (VFU). In fact, one young chorus member, Joe Pickin (whose father and brother also sing with the chorus) jointly founded the Bristol Suspensions in 2014 in his first year at university. The Bristol Suspensions won the VFU in 2016. Joe then went on with two other chorus members, Rob Foot and James GowerSmith, in the quartet Tagline to win the Silver Medal at the International Youth competition in the USA. Hallmark has even attracted a young and talented musician and singer, Jérémy Jacomet, to move from Lyons in France, leaving his country and career behind to start a new life here in Sheffield, singing with the chorus. That is surely a sign that it takes musical excellence to attract more of it.

This chorus is blessed with an abundance of musical talent as well as an inspired leadership and music team, through which and by whom many of the songs in our repertoire have been arranged. The Chorus have also formed many successful and medal winning quartets over the years, particularly in the last ten years. The musical direction of the chorus lays much store in quartet singing as a means of developing the vocal and performance skills of the chorus.

The annual competition in the UK, where choruses and quartets gather for a long weekend indulging in harmony singing and competition, is organised by BABS, which now has over sixty registered member choruses and over one hundred quartets. It has become the largest Barbershop movement outside of North America, even though barbershop has since become very popular in Spain, the Netherlands, Germany, Scandinavia as well as in the Antipodes.

Hallmark of Harmony is the registered stage name for the Sheffield Barbershop Harmony Club. We first became the UK barbershop chorus champions in 1986 and have won this Gold medal a record eight times in total, as well as countless silver and bronze medals in between. Following success in 1986, they became much sought after and made appearances on many media outlets across the UK and the U.S.A. Hallmark’s latest win was at the last annual convention in 2019 with an all time record high score. They have not been placed outside the top three choruses for the past eight years. So Hallmark are considered to be in the ‘Premiership’ of UK barbershop. They have represented the UK at the huge annual International Convention in the U.S.A. no less than four times. Their latest appearance on the international stage was in 2015 in Pittsburgh, U.S.A.

As 2019 champions, whilst The chorus had received an invitation to attend the international convention in the U.S.A. in 2020, the event was inevitably cancelled. Hallmark’s attendance at the European competition in Stockholm in early 2021, was also cancelled as was the 2021 UK annual convention; all scuppered because of the Covid-19 pandemic. The chorus is now focussed on planning for its future, for when they get back together and start to sing live again. In the mean time, during the 2020 lockdown, they still produced three recordings. For your entertainment. YouTube links to these are here:


Both the opening quotes are courtesy of Alan Johnson and Harry Wells’ “The History of 1 British Barbershop Harmony” 1974 to 1999, via the BABS web site. A book by Gage Averill, entitled “Four Parts, No Waiting” A Social History of American 2 Barbershop harmony. History of Hallmark - Revision 2.1

Sign up for our newsletter to receive the latest news and event postings, we look forward to keeping you up to date!